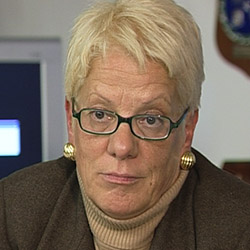 Carla Del Ponte
ICTY Chief prosecutor (1999-2007)
Carla del Ponte (9 February 1947 -) was born in Lugano, Switzerland. She studied law in Bern and Geneva, earning her degree (LL.M.) in 1972. After a few years at a law office in Lugano, she set up her own law and notary's office in Lugano and started practicing law in 1975. In September 1981, Ms. Del Ponte was appointed investigating magistrate and later became public prosecutor in the office of the Lugano district attorney. Responsible for investigating financial and white-collar crime, international drug trafficking and organized crime, she worked alongside the late Italian investigative judge Giovanni Falcone. Ms. Del Ponte was appointed Attorney General of Switzerland on April 1, 1994.

Carla Del Ponte was the Tribunal's Chief Prosecutor for more than eight years. During her mandate, almost 100 accused persons were brought to the Tribunal's custody, although the Tribunal's most wanted, Radovan Karadžić and Ratko Mladić, remained fugitives. In 2004, she signed the organisation's final indictments in accordance with the Tribunal's completion strategy.