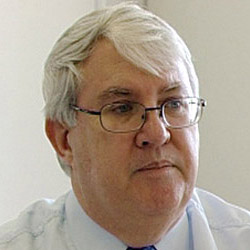 Graham Thomas Blewitt
ICTY Deputy Prosecutor (1994-2004)
Graham Thomas Blewitt (20 June 1947-) started his career as a New South Wales magistrate. He joined the Australian Nazi War Crimes Special Investigations Unit in Sydney in 1988 as the deputy director, and eventually became the director of the unit. In February 1994 became the deputy chief prosecutor of the International Criminal Tribunal for the former Yugoslavia where he stayed until 2004. Mr. Blewitt became the de facto head of the Office of the Prosecutor since the sudden departure of the first prosecutor, Raman Escovar-Salom, Venezuela’s Attorney-General.

In 2005, Mr. Blewitt returned to Australia as a Magistrate of the NSW Children’s Court where he served until 2019. He retired in 2019, continuing to be active in the sphere of international criminal law. In 2000, he received the Australia Day Honors for service to international humanitarian law, particularly in the area of war crimes investigation.

Mr. Blewitt was the author of numerous publications on retributive approach to justice.