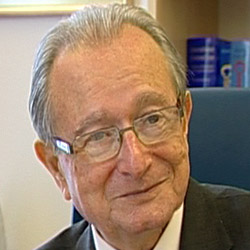 From 1996 to 1999, Judge Agius was Pro-Chancellor of the University of Malta. Between 1989 and 2001, Judge Agius represented the Maltese Judiciary on the Central Council of the International Association of Judges. Prior to being elected to the Tribunal, Judge Agius was a Senior Judge in the Court of Appeal of Malta and the Constitutional Court of Malta, and was Acting Chief Justice on several occasions. Between 1999 and 2008, Judge Agius was a Member of the Permanent Court of Arbitration. From 1990 and 2001, he was Head of the Maltese Delegation at all annual meetings of the United Nations Commission on Crime Prevention and Criminal Justice in Vienna. Judge Agius was first elected to the ICTY by the United Nations General Assembly in March 2001. As of 2009, he served as a Judge on the Appeals Chamber of both the ICTY and the International Criminal Tribunal for Rwanda (ICTR) until the respective closure of the two Tribunals in 2015 and 2017. From 2015 to 2017 he was a President of ICTY. During his tenure on the Appeals Chamber of the ad hoc Tribunals, Judge Agius presided over both ICTR and ICTY appeals in a number of cases.

He had been President of the International Residual Mechanism for Criminal Tribunals (Mechanism) since 2019, having been a Judge of the Mechanism since it commenced operating in 2012. In June 2020, he was appointed by the United Nations Secretary-General to a second term of office as Mechanism President, effective 1 July 2020 to 30 June 2022, when he will be stepping down from the position.