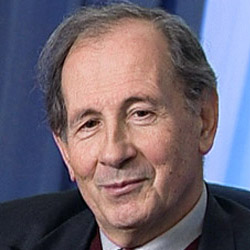 Claude Jorda
ICTY Judge (1994-2007); President (1999-2003)
Judge Claude Jorda (1938 -) was born in Algeria and educated in the Institut d’Etudes Politiques in Toulouse (1960), and the Barreau de Toulouse (1961) and the École Nationale de la Magistrature (1966). He joined the central Administration of the Ministry of Justice and, at the same time, taught at the School of Law at the University of Paris.

Between 1970 and 1985, Judge Jorda held managerial posts at the École Nationale de la Magistrature and the French Ministry of Justice. He was then appointed Chief Prosecutor at the Bordeaux Appeals Court, and promoted to Chief Prosecutor at the Paris Appeals Court in 1992, where he remained until his appointment to the International Criminal Tribunal for the former Yugoslavia (ICTY). Originally appointed a Tribunal judge in January 1994, he continued to serve as the Tribunal’s President between 1999 and 2003. In 2003, Judge Jorda was one of the first 18 judges elected to the International Criminal Court (ICC). In 2007, he resigned from the ICC for reasons of permanent ill-health.

Judge Jorda has contributed to various specialist legal publications on human rights and international humanitarian law and has written extensively on the role of victims and on the development of international criminal law. A member of the Société Française de Droit International, Judge Jorda also participated in several judicial cooperation missions to Chile, Guatemala, Côte d’Ivoire, Egypt, Algeria, Canada and Madagascar.