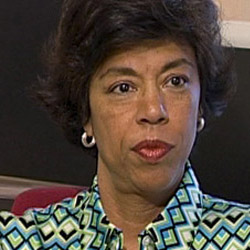 Gabrielle Kirk McDonald
ICTY Judge (1993-1999); President (1997-1999)
Gabrielle Kirk McDonald (12 April 1942 -) is a legal pioneer who progressively shaped the development of civil rights law in the United States, international criminal law, and international arbitration law. She started her career as a staff attorney for the NAACP Legal Defense and Educational Fund and later entered private practice, while also teaching law. As the first African American to be appointed to the federal bench in the southern United States, she served as a judge on the United States District Court for the Southern District of Texas from 1979 to 1988.

In September 2013, she retired from the Iran-United States Claims Tribunal where she had served as one of three American Arbitrators since 2001. Judge McDonald published numerous articles making a contribution to international law.