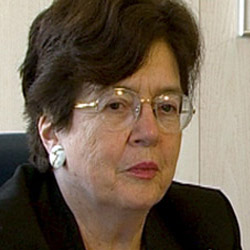 Patricia Ann Wald
ICTY Judge (1999-2001)
Judge Patricia Ann McGowan Wald (September 16, 1928 – January 12, 2019) graduate of Connecticut College (B.A. 1948) and Yale Law School (LL.B. 1951) and was admitted to the Bar in 1952. She served, among other positions, as a law clerk to Judge Jerome N. Frank of the U.S. Second Circuit Court of Appeals and as Assistant Attorney General for Legislative Affairs in the Department of Justice prior to being appointed to the bench in 1979. Judge Wald has served on the U.S. Court of Appeals for the District of Columbia Circuit since July 1979, serving as Chief Judge of the Court from July 1986 to January 1991. She was the first woman to be appointed to the District of Columbia Circuit and was also the first woman to serve as its chief judge.

After Judge Gabrielle Kirk McDonald resigned from the International Criminal Tribunal for the former Yugoslavia (ICTY), Judge Patricia M. Wald was appointed to serve her term from 1999 until 2001.

In 2004, Ms. Wald was appointed by President Bush to the President’s Commission on Intelligence Capabilities of the U.S. Regarding Weapons of Mass Destruction, an independent panel tasked with investigating U.S. intelligence surrounding the United States’ 2003 invasion of Iraq and Iraq’s weapons of mass destruction. In August 2012, Ms. Wald was confirmed by the Senate as a member of the Privacy and Civil Liberties Oversight Board after being nominated by President Barack Obama.

She was a Council Member and First Vice President of the American Law Institute and a Fellow of the American Academy of Arts and Sciences and received many honors and awards, including the Presidential Medal of Freedom in 2013.