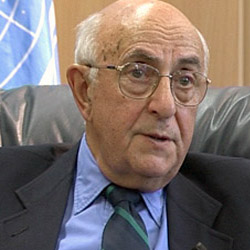 Theodor Meron
ICTY and IRMCT Judge (2001-2021); President (2003-2005; 2011-2019)
Judge Theodor Meron (28 April 1930 -) was born in Poland. He received his legal education at the Universities of Jerusalem, Harvard and Cambridge. Prior to his immigration to the United States in 1978, he was legal adviser of the Israeli Ministry of Foreign Affairs, Ambassador to Canada, and Permanent Representative to the United Nations in Geneva. In 1978, he became a Professor of International Law at New York University School of Law.

Judge Meron has an extensive academic career as a lecturer. Since 2014, he has been a visiting professor of international criminal law at the University of Oxford. He is the author of more than 100 articles in legal publications and 15 books covering topics of human rights and international law.